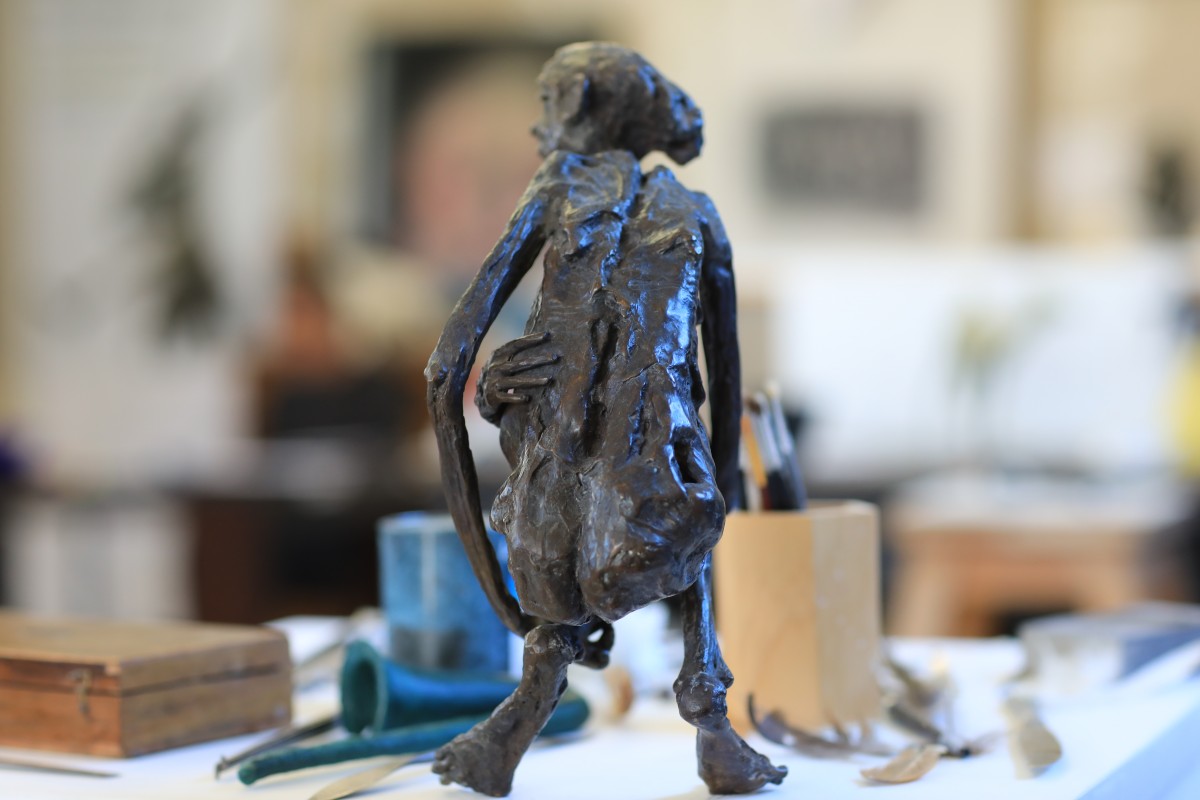 It is with Pierre Mouzat that we have the pleasure of talking today in his own workshop located exactly at 23, rue du Commandant Cottenest in Brive-la-Gaillarde. This Brivist sculptor, 100% Corrèze, is an accomplished and recognized artist since many of his works have been exhibited in France and abroad either through ephemeral exhibitions or, more permanently, through galleries. However, it should be remembered, his studio is not really a gallery but, he concedes, I am open to the curious and to art lovers to discuss my works, here, present, or art in general.

Pierre strives to warn us that he easily understands that many of our fellow citizens may express a certain mistrust or even suspicion of contemporary art. And for good reason: according to him, a large majority of art works are nothing other than usurpations or simple financial transactions! Explanations. Since the 1960s, we have witnessed a revival of conceptual art, supposedly inspired by the ready-mades of Marcel Duchamp. However, if we analyze this phenomenon carefully, we understand that many artists were created from scratch. Even more, it is because of the tax exemption for art works that the more fortunate knowingly raise the prices of certain works in order to obtain a significant tax deduction. In short, it’s a safe investment. Finally, conceptual art, by disregarding the materiality of creation, logically comes to disregard the value of work, effort and technique itself inherent in the notion of art or know-how. So, how can one justify that a tin containing the excrements of the artist Piero Manzoni can sell for more than 200,000 eu? Or, even more, that Maurizio Cattelan’s Comedian, which is nothing more than a fresh banana taped to a wall, could also sell for over 100,000eu?

It is understandable that Pierre Mouzat wishes to recall the heritage and the teaching of great artists such as Michelangelo, Giacometti or Camille Claudel. The artist must remain humble and take the example of certain masters: “geniuses, in art, there are at most 2 per century! As for Pierre Mouzat‘s artistic training, it essentially took place in two important stages. The first began by taking woodcarving lessons with Jean-loup Delaroche. The second was ideally realized by successfully entering the prestigious Boulle school in order to undergo a solid training there for three years.

This is truly the school of high standards and discipline.  We worked 8 hours a day, five times a week and made up to 4 big schoolwork per quarter. Our teachers were monsters in technique and art history. I will always remember what one of my teachers said: « It is not that is not visible that it shouldn’t be done! »

This formula and this slogan, the sculptor sometimes thinks about when he creates the iron framework of these future bodies, whether human or animal. Because, in fact, this framework disappears in the work finished in bronze. However, when we create the framework, the artist is necessarily interested in the human or animal skeleton in question.

The sculptor often claims to be a sculptor of balance because he has differentiated himself from his peers by producing works that do not need a plinth. Which is remarkable in every sense of the word. It is also a challenge because the majority of his creations are based on fairly fine elements. This balance is of course obtained upstream during the first stage in plaster.

If some people says that is art is morbid, Pierre Mouzat asks us that the dark side of life, often overlooked by most of us, is part of our identity because life remains, at its core, tragic. Paradoxically, accepting this truth is accepting life. As the artist mischievously remarks,

“Is a botoxed and remade grandmother genuinely still a grandmother?  What is its relation to life and to truth? To live is to grow old! »

Finitude, death and lack define us and make us, paradoxically, human. In short, this negation of life gives it all its value. However, Pierre Mouzat wishes to recall that through all his vision and this theory, an art works must be appreciated emotionally. One does not need to be a scholar or an expert in art history to appreciate a work, especially since a sculpture can touch one another: the feeling remains above all primordial because it is the beginning.

This is how our interview with Pierre Mouzat is coming to an end.

For the most curious of us, it’s still possible to cast a glance on his website: pierre-mouzat.fr